We were the world: Philadelphia and Live Aid

Philadelphia, birthplace of our nation, can also lay claim to being the U.S. cradle for a modern cultural phenomenon—the fundraising mega rock concert. Thanks to favorable geography, the availability of super-capacity John F. Kennedy Stadium and experienced local promoters Electric Factory Concerts, Live Aid debuted in Philadelphia on the thirteenth of July one score and eight years ago.

Yours truly was among the 101,000 in the stands in Philly. It was one of those exhilarating occasions that most of us only experience a few times during our life—you’re an eyewitness on the scene when something historic is happening.

The organizers of Live Aid billed it as a global jukebox, and for concert-goers, it delivered a heady dream concert—all of chart-topping artists of the day, complemented by music legends, performing live for you in a single daylong concert. For $35, it was a priceless bargain.

Reportedly 1.5 billion people around the world watched the live broadcast of the concert, which raised more than $280 million in funds and global awareness exponentially for Ethiopian famine relief. As a member of Generation X, I knew how the Baby Boomers who’d been to Woodstock reveled in being able to say that they’d been there. Live Aid was my shot at being present at the same sort of generational touchstone event.

So what was it like to be at (one of) the centers of the universe that day? In a word, hot. The mercury soared to 88 humid degrees, and if you were at all familiar with good old JFK Stadium, you know that there were very few amenities. The restrooms flooded early in the day and lines stretched for blocks, so we tried to keep our bathroom runs to a minimum.

One concert goer took climate control into his own hands, spraying us and the rest of the sweltering crowd with a hose from a broken cooling station. A dude behind us in the bleachers kept complaining that he felt ready to hurl, which kept my friends and me a little on edge. Fortunately, when you’re a college student, such creature discomforts don’t really ruin your enjoyment of the day.

What do I remember about the show? The concert’s opening hymn, “Amazing Grace,” sung by Joan Baez, kicked off the festivities at 9:00 a.m. And we danced as local favorites The Hooters performed their two-song set, surprising the global audience who knew little of them. We cheered when Teddy Pendergrass returned to the stage in his first performance since his paralyzing accident.

And the music went on and on. It was like I designed my fantasy rock all-star team for the day —Bryan Adams, Simple Minds, The Pretenders, Tom Petty, The Cars, The Power Station, and Duran Duran. A reunion of the rock firm of Crosby, Stills, Nash and Young proved that there’s always hope for reconciliation. A set by the surviving members of Led Zeppelin thrilled fans who’d first rocked out to them back when “Stairway to Heaven” was new music.


While the bands set up at JFK, we’d watch the large screens that we could barely see to get a glimpse of the acts performing at the partner venue, Wembley Stadium in London. Not a bad bill across the pond—Sting, Dire Straits, Queen, David Bowie, the Who, Elton John, U2.

I recall thinking at the time that Phil Collins was a hero since he was the only singer who performed in the morning at Wembley, and through the magic of the Concorde jet (remember those?), in the evening in Philly. Of course, this feat primarily required Phil to sit tight in first-class during a three-hour flight, but hey, it seemed impressive then. 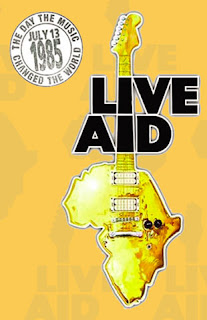 The evening built to a crescendo with some of rock’s biggest acts at the time.  Philly girl Patti LaBelle, capped by a remarkable sculpted, beaded plume of hair, stirred it up. Mick Jagger moved like, well, Jagger as he performed a duet of “It’s Only Rock ‘n’ Roll” with Tina Turner. My favorites, hometown boys Daryl Hall and John Oates played along with their idols, David Ruffin and Eddie Kendricks of the Temptations. Then Lionel Ritchie led the all-star choir in one of the songs that started it all, “We Are the World.”

The concert wrapped at 11:00 p.m., just under the wire of Philly’s notorious concert curfew. Departing for the burbs after a long, but stellar day, I had the satisfaction of having helped a humanitarian cause while also earning the right to say that “I was there” for the defining musical event of my generation.

Were you at Live Aid in Philly? What historical events have you been an eyewitness to?  Tell us in our comments.

Write your stories down so that your descendants will know you were there and what it was like. Personal Chronicles can help you save your stories.


Posted by Personal Chronicles at 2:24 PM

Email ThisBlogThis!Share to TwitterShare to FacebookShare to Pinterest
Labels: Happenings, Live Aid Concert, We were the world: Live Aid in Philly